The Value of Coralligenous Habitats 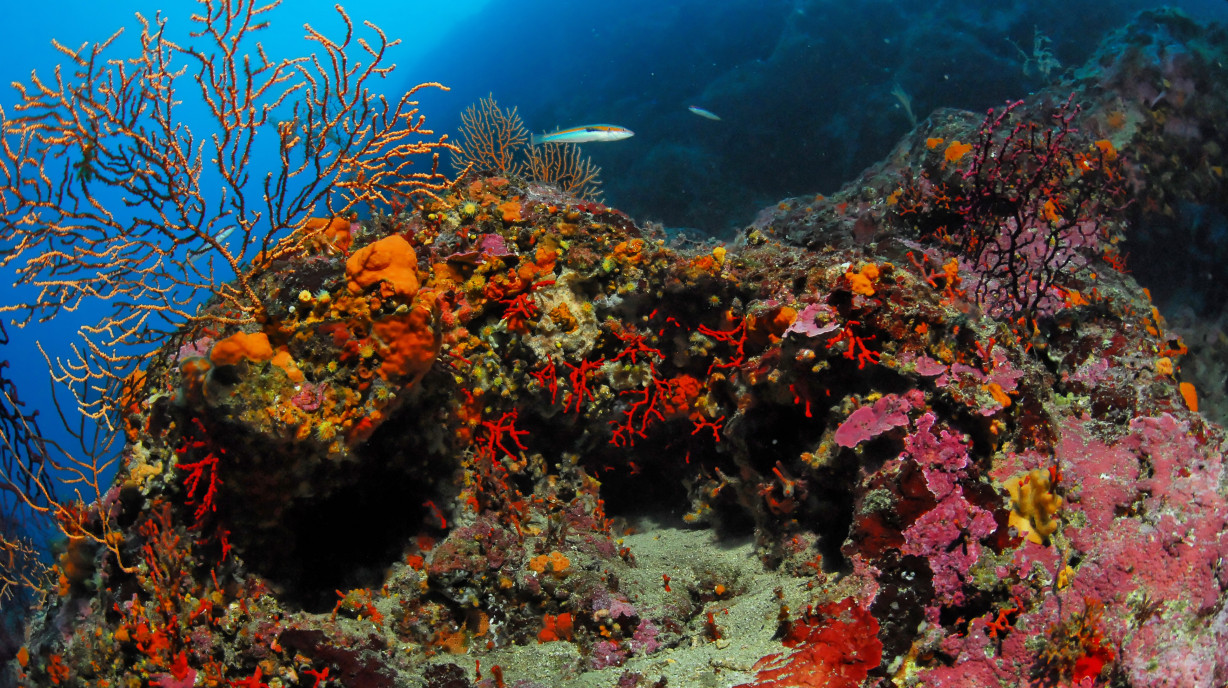 What do we know about nature? Not a whole lot. According to estimates from the French National Museum of Natural History, we have identified between 1% and 10% of the species on Earth.1 Marine ecosystems have been greatly damaged from being exploited for our wants and needs, though we still know very little about them and the role they play. Whether it is for biology or economics, we should be diving deep into how these habitats are important on both a large and small scale. This is what Laure Thierry de Ville d’Avray, Dominique Ami, Anne Chenuil, Romain David, and Jean-Pierre Féral have demonstrated by studying a little-known Mediterranean habitat known as ‘coralligene.’

Why should nature be protected? Up until the 1970s, this question had never even been considered. General thought was that nature just belonged to humans. Ideas about this have since changed and today nature is classified by international conventions as a common heritage of mankind which must be passed along to our future generations. Such conventions, however, are not very restrictive, since they are rarely accompanied by sanctions. Yet we are motivated to protect nature because we see value in it. But what kind of value?

The Value of Nature

A biologist might say that nature has an intrinsic value, meaning that it has an inherent value independent of its utility to the humans that strive to protect it. An economist, on the other hand, would say that it is useful to human beings. In economics, value is linked to an individual’s satisfaction. This economic value could be monetary, as it is the case with precious minerals, or not,  such as with the oxygen we breathe, primarily produced by algae. In any case, this value cannot be understood outside the satisfaction of a human being. According to this economic principle, the same ecosystem that is inaccessible (not useful) to humans will not have the same value as one that is accessible (useful) to them.

So, in order to implement nature protection policies that are accepted by decision-makers and the public, economic arguments tend to work better. This is why ecosystem services—or the benefits that humans receive from nature—are often studied even in biology. The idea that nature is useful to humans is nothing new. Four hundred years before our era even began, Plato had already observed that deforestation leads to soil erosion.2 Today, everyone knows the role bees play in conserving biodiversity. However, these services are often defined for large ecosystems3  and populations. Small-scale ecosystem services are more difficult to identify. However, this is just what Laure Thierry de Ville d'Avray, Dominique Ami, Anne Chenuil, Romain David, and Jean-Pierre Féral did in their study on coralligenous habitats.

Little is known about coralligenous habitats. Besides acknowledging them as a typical Mediterranean marine habitat, biologists hardly agree on a common definition. Coralligenous habitats are characterized by encrusting calcareous algae and contain more than 1,500 identified species. Particularly beautiful, they can display red coral, gorgonians, bryozoans, and sponges. The species, shapes, and colors of these habitats differ from one region to another and, in particular, between the East and West and the North and South of the Mediterranean. Though they've been studied very little, they nevertheless are one of the Mediterranean’s richest habitats in terms of species, along with seagrass Posidonia oceanica (marine plants found close to the surface) and deep-sea coral (studied little due to it being inaccessible). Inaccessibility is in fact one of the main reasons why it is difficult to study marine habitats. Those who want to observe coralligenous habitats up close must be serious divers.

Studying these habitats therefore presents two difficulties. The first is that the definition of ecosystem services does not fit well with small-scale environments with a purely local utility. The second difficulty is that studying coralligenous habitats up close is both technically and financially difficult. Furthermore, these habitats differ from region to region in the Mediterranean, making the benefits on the population quite different according to each location. The researchers therefore concentrated on identifying the ecosystem services of coralligenous habitats in two places in southern France. The first is Port-Cros national park, which has been around for about fifty years. The other is Calanques national park, which was created in 2012 and is under considerable anthropic pressure,4 due to the fact that it is close to Marseille. 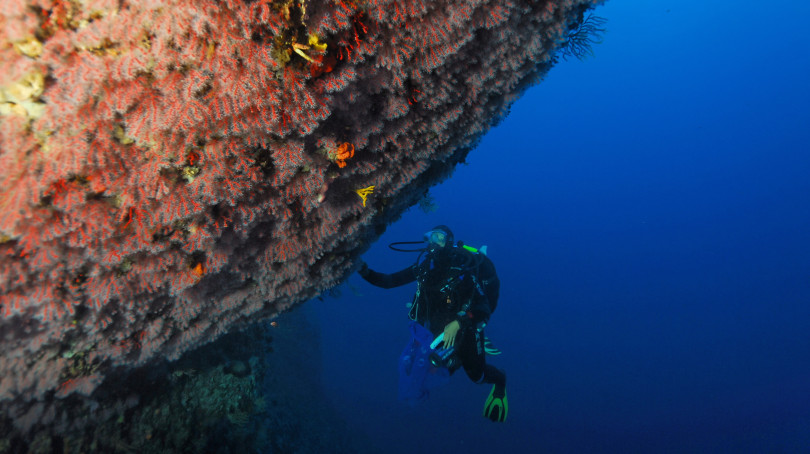 Studying the Seas Without Floundering

Fifteen services were found and can be classified into four categories. The first category is provisioning services, which is when something is taken from the habitat. Examples of this are fishing or the harvesting of red coral (a relatively expensive material popular with jewelers). The second category is cultural services, which is the knowledge or enjoyment one can get from natural environments. Examples of this are scientific discoveries or recreational diving (one of the leading activities to do around Marseille, which is the birthplace of this sport). The third category is regulating services, which creates a better living environment through, for example, carbon sequestration via coralline algae or water filtration by sponges. These services are extremely difficult to assess at present. Finally, there exists a fourth service category which is historically set aside when dealing with standard economics, since human beings do not directly benefit from it. This category is supporting services. Supporting services are the ecosystem's functions that guarantee the life cycle of its species, such as the habitat or nursery.

Workshops with certain experts were then set up so a consensus could be made regarding these services. This allowed the researchers to compile a list of ecosystem services and determine the uncertainties that remained. Through this, they were also able to rank the services by order of importance. The definition of the importance of an ecosystem service has many facets. Some of these are whether it impacts many people, is at the basis of other services, or is more threatened. The experts in this study defined food, diving spots, research potential, and artistic and scientific inspiration as the most important services of coralligenous habitats. Such studies can be difficult to carry out, since they depend on statements rather than hard data. They can become even more challenging when the people interviewed do not view or define the subject matter (in this case, coralligenous habitats) the same way. For example, fishermen are direct users of coralligenous habitats, though their familiarity with them is somewhat limited to what they harvest rather than the habitats themselves. They therefore are not always able to distinguish a coralligenous habitat from any other type of habitat in which they fish. This indirect study nevertheless allowed researchers to have an overview of the services provided by coralligenous habitats at any given moment. 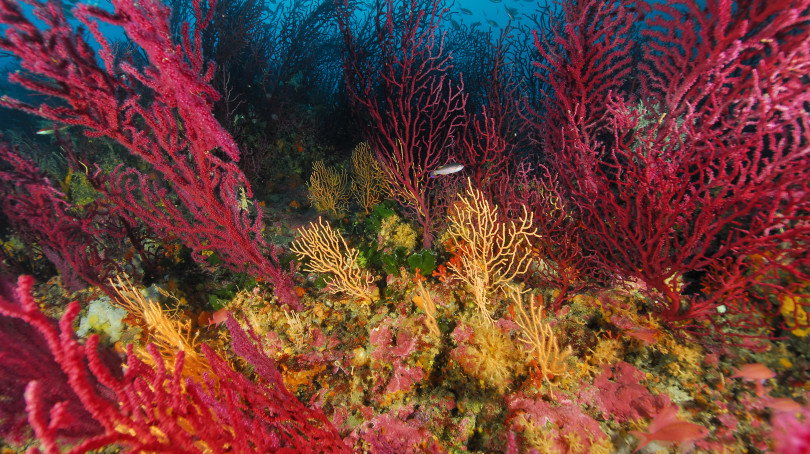 In order to implement nature protection measures, it is of course necessary to know what should be protected. Weighing the importance of protecting one ecosystem over another is particularly challenging. When it comes to marine ecosystems, we still sadly lack scientific data. Because coralligenous habitats are difficult to access, it is almost impossible to precisely assess all their regulating ecosystem services, such as carbon sequestration. However, this could be of incredible importance. Further studies on the subject could improve this.

This study, however, gives us an overview of the important local ecosystem services that are economically beneficial such as fishing, red coral harvesting, and diving (thanks to the beauty of the seascape which makes it a diving hotspot). Though ecosystem services are often considered on a large scale, they can also have local pertinence.

Coralligenous habitats may not be protected in and of themselves, though they are part of the larger framework of protection that encompasses the Port-Cros and Calanques natural parks. And while these habitats are not easy to access, the local population can nevertheless benefit from their presence. Understanding natural environments helps us recognize how valuable they are to humans and further helps implementing nature protection policies.

Portfolio : Under the Sea, the Coralligenous Habitats