How the Mental Load for Women is Twofold 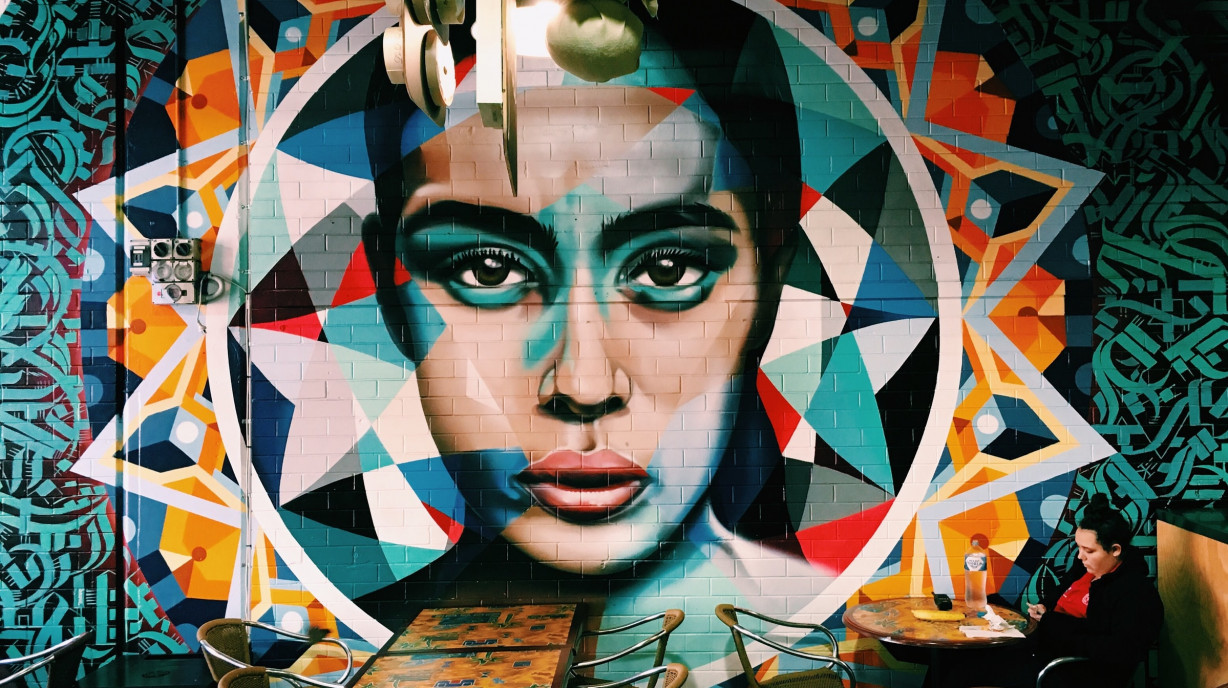 Photo by Craig Ren on unsplash

Let’s say that a woman spends more time at work than her partner. Where’s the problem in that? In any case, it’s a rare occurrence—and for good reason. According to a study by Sarah Flèche, Anthony Lepinteur, and Nattavudh Powdthavee, the unequal distribution of domestic tasks often takes a toll on a woman's professional life. This study demonstrates how this mental load (which the majority of women still bear today) prevents them from being able to equally juggle their professional and family life and also harms their well-being.

From the 20th century on, women have been acquiring new rights and freeing themselves from their role as housewives and stay-at-home mothers to access education and the labor market. Though decades of struggle for women’s rights have indeed brought about some great progress, women are still far from being equal to men in the professional sphere. Discrimination in hiring, sexist behavior at work, the notorious glass ceiling that blocks their access to positions of responsibility and hinders their career development, and the lack of parity are all factors that widen the gap in disparities between men and women. Data from the French National Institute of Statistics and Economic Studies has demonstrated that in 2015 men were earning 23% more than women and 1.2 million salaried women were working part-time, compared to 471,800 men. Many studies have examined the causes of these persistent gender inequalities. Even when discrimination is not included in the mix, women are still at a large disadvantage in the labor market because of their different occupational choices (trades, sectors, and working hours) as well as their less risky and less competitive behavior.

From Professional to Domestic Inequalities

But how is it that women, who on average have more qualifications than men, make career choices that put them at a disadvantage? Could professional inequalities be caused by something rooted in the private sphere? In 2010 in France, women still spent an average of 4 hours a day on housework—one hour less than the average in 1990. Men, on the other hand, spent in 2010 an average of 2 hours a day on housework. This did not budge from the average 30 years ago. According to INSEE, in 2010, women were responsible for 64% of household chores and 71% of parental tasks. This is not without consequence. This unequal management of a couple’s family life saddles women with a significant cognitive burden known as the mental load. This load, which is part of the private sphere, does not just add to but actually interferes with a woman’s professional activity. Women bear this load at work, which influences their choices as well as their professional behaviors. It is precisely these choices and behaviors that differ from those of men and contribute to the widening gender gap in the labor market.

Mental load is “this task of managing, organizing and planning, which is at the same time intangible, essential, and constant, has as its objective to meet the needs of others and the smooth running of the household,” according to researcher Nicole Brais (Université Laval, Quebec City). It's more about the cognitive load associated with the proper management of domestic tasks than about the performance of these tasks itself. The problem with this? This load is not equally distributed between the couple and is still largely borne by women, which consequently creates more inequalities in the labor market.

The mental load goes well beyond impacting occupational inequalities by going on to affect women's well-being. The study conducted by Sarah Flèche, Anthony Lepinteur, and Nattavudh Powdthavee has demonstrated that women who work more than their partner are less happy. They are less satisfied with their family and marital life and are also more stressed.

The three researchers conducted a study based on the replies given by American couples between 2015 and 2016 to determine the causes of this unhappiness. They analyzed how the number of hours worked and the division of housework between the couple impacted the overall satisfaction of both men and women. Their results indicate that this uneven distribution of housework is largest culprit when it comes to the happiness of women who work more than their partner. This can be seen by the fact that women put up with working more than their partner if their partner makes up for it by spending more time on housework. Women’s dissatisfaction with longer workdays compared to their partner is therefore directly linked to the lack of equity in their shared household tasks. This unequal distribution feeds the mental load that weighs most heavily on women, for not only do they put in more work hours than their partner, but they also put in more housework hours. Women therefore need more flexibility at work to offset this double burden. When this flexibility is not available, their mental load increases and weighs on their well-being. 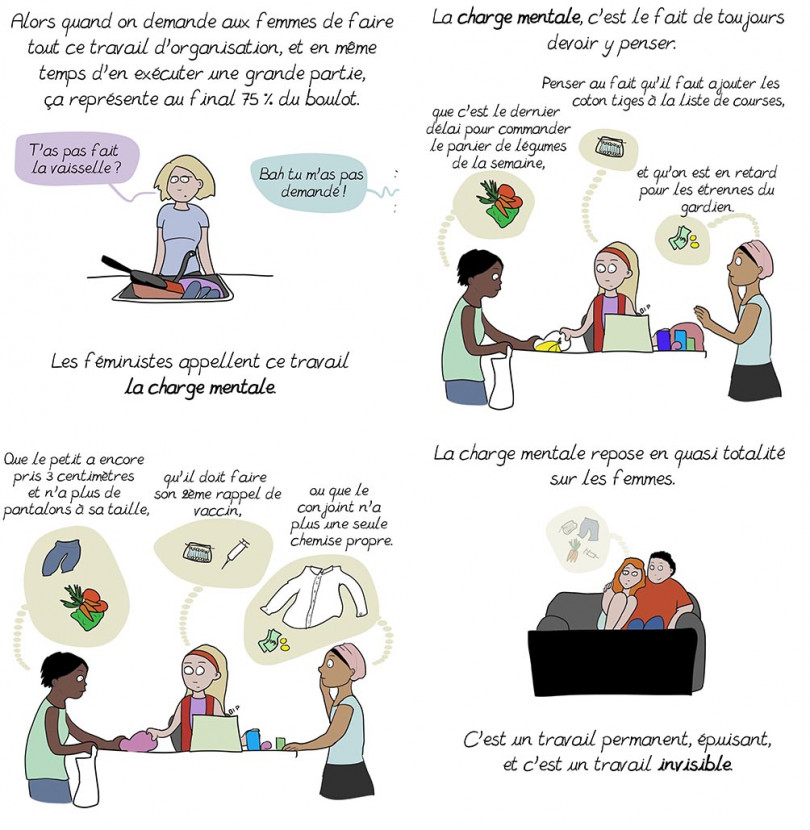 The Consequences of Social Norms

Why does the mental load continue to weigh on women's well-being? This study also examined how the prevalence of gender stereotypes at home and at work may affect women’s contribution to both. Inequalities in the labor market could be explained by the fact that women do not want to go against social expectations (for example, the idea that a woman should earn less than her husband) and deviate from a standard that could possibly endanger their relationship. Other research has shown that a significant proportion of women stop working or reduce the numbers of hours they work once they begin to earn more than their husbands. However, the men who were surveyed were indifferent to whether their wives earned or worked more. The study also revealed that women who work more than their husbands generally view relationships with a more egalitarian view and may therefore be more affected if housework is not shared equally.

These results therefore suggest that women's aversion to working more than their partner is largely due to the consequences of unequally distributed housework. Women’s mental load and its impact on their well-being is therefore not so much tied to women’s willingness to conform (consciously or not) to societal expectations and pressures, but rather the consequences of these stereotypical behaviors.

According to this study, the use of outsourced domestic services (such as household and childcare assistance) would allow women to devote less time and energy to housework and therefore improve their well-being. However, the mental load stems from social norms that have been instilled through society’s assigning of distinct gender roles and behaviors. By freeing themselves from their roles as stay-at-home mothers and housewives, women’s place in society has been able to evolve. However, the social norms related to day-to-day operations in the home are struggling to keep pace. For this reason, the authors also recommend encouraging men to do more housework, which requires changes in gender roles and behaviors that have been instilled from an early age.

The solution would then lie in the education of both boys and girls. It's therefore essential to implement public policies that are aimed at reversing images, actions, and discourse that convey gender stereotypes. For example, increasing the duration of paternity leave will be all the more effective when mindsets have evolved in this direction. The aim today is to enable women and men to combine their professional and family lives in an equal and balanced manner.